Preparing for an Offshore Race, OSR Sections 5 and 6 and Appendices

Chuck Hawley
Chuck Hawley, a strong supporter of Pac Cup, has posted an exceptionally thoughtful and thorough discussion of the Offshore Special Regulations as applied to races like ours. These are on his blog, and he has allowed us to repost them here.

Section 5 deals with the gear that each crew member wears on his or her body. Due to the differences in the standards organizations in the US and the rest of the world, the Life Jacket section get complicated quickly. If you skip down to the large US Sailing prescription in bold italics, it says that in the US you need to either have a Coast Guard Type 1 device (which makes virtually no sense on a recreational boat, whether racing or not) or a inflatable flotation device that meets either a British or European Community standard. This is curious, since inflatable flotation devices have been approved in the US for over a decade, so it's not obvious why the prescription would look east for compliance. 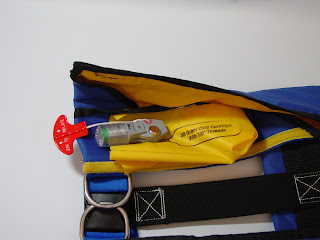 Example of a 150 Newton, water activated inflatable life
jacket with an integral safety harness. Note the silkscreen
indication of which replacement cylinder is used when repacking.

So what kind of flotation device are they describing? It's a single chamber inflatable life jacket with 150 Newtons (33.7#) of buoyancy with a gas inflation system. In the US, such devices are generally called "Offshore" life jackets, but the Coast Guard and UL attempt to place them in the various "types" of life jackets that are also used for inherently buoyant products. This is where things get tricky, and it's probably a good idea that US Sailing and ISAF steered well clear of the confusing Type designations that are in use in the US.

In the very next section, 5.02, you'll find the requirements for safety harnesses and safety lines. What becomes immediately clear for most sailors is that the way to both meet the requirements for the life jacket and safety harness sections is to buy a single product that combines both products. Thus, an offshore sailing life jacket with 35# of buoyancy (some have slight more or less, but we generally call them 35# life jackets) and a means of attaching a safety tether (D rings) is the ultimate answer. Some offshore crews will elect to go with a separate harness and life jacket, but generally the two are combined. 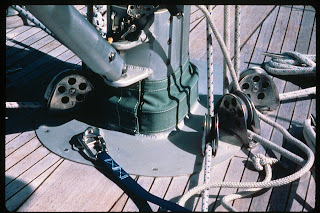 Locking carabiner on a padeye at the base of the mast. The
centerline connection point makes it impossible to go over
the side of the boat. Very secure.

Safety harness lines (tethers) have come under greater scrutiny, and now have multiple requirements on how they are constructed. In general, they cannot be old, they cannot use magnetic hardware, and they can't be longer than 2m. We have always recommended tethers which can be released at the chest end with a single pull of a release cord, since boats can sink quickly and you need a means to release yourself from the vessel. You'll also need to have 30% of your tethers in a double configuration so that you can shorten the length to 1m.

Finally, 5.09 requires that you practice the QuickStop man-overboard maneuver on an annual basis. You will be required to show an affidavit that says that you and your crew have done such a practice (and it's a damned good idea to practice until perfect.) 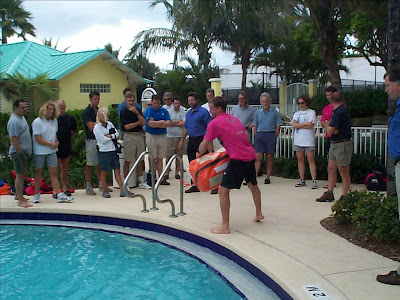 Safety at Sea Seminar in Miami for the stopover of the Volvo Ocean Race in 2005.
While there was a wide range of experience among the attendees, all reported
that they gained something from the seminar.

30% of your crew, including the skipper, must attend a Safety at Sea Seminar every five years. Geneally, there will be a seminar scheduled in the vicinity of the race starting location in the spring before the start. For West Coast races, seminars have been held in Seattle, Portland, Vallejo, Oakland, San Francisco, Santa Cruz, Long Beach, Newport Beach, and San Diego. However, every year there are crews who discover late in the process that they need to attend a seminar, but the only seminars that are available are 2500 miles away. Plan ahead!

There are two categories of Safety at Sea Seminars in the US. One is a single 8-hour day of lectures and demonstrations, generally held in a yacht club or community building. This meets the requirements for virtually all US Category 1 races. The second is a two-day event which combines lectures and demonstrations on one day, and hands-on activities including in a pool with life jackets and life rafts on the second day. The two-day course is designed to meet ISAF requirements which are described in 6.01. The advantage of attending a course that meets ISAF requirements, other than the additional skills and education that you'll receive, is that your training certificate is recognized worldwide.

Finally, you should have two crew members on board who hold Senior First Aid Certificates, including the specific issues which occur at sea like hypothermia and seasickness. In the US, many of the first aid and first responder courses are intended for land-based accidents and have little relevancy for mariner. Courses are offered in many communities specifically designed for either commercial or recreational sailors which will prove to be more applicable for our sport.

The appendices of the Special Regulations contain clarifying material (life raft specifications, how to conduct a Safety at Sea Seminar), as well as practical information about medical conditions, man overboard, drag devices, and a full index of the regulations. Of special interest to the owner facing a yacht inspection is Appendix C, the Standard Inspection Card. Not every race or boat inspector will use Appendix C, although some Notices of Race may specify it. The "card" doesn't go over every section of the Special Regs, and it would be risky to presume that the inspector will limit his/her inspection to just what's on the card.

Having inspected perhaps fifty yachts prior to Category 1 races, the author has a few recommendations for those facing inspection to ensure that your boat won't either require re-inspection or have a list of comments which need to be rectified prior to the start of the race.