Preparing for an Offshore Race, OSR Sections 1 and 2

West Marine's Chuck Hawley, a strong supporter of Pac Cup, has posted an exceptionally thoughtful and thorough discussion of the Offshore Special Regulations as applied to races like ours. These are on his blog, and he has allowed us to repost them here.

This section describes, much like the first few rules in the Racing Rules of Sailing, what the purpose of the Special Regs is, and who is responsible for carrying them out (generally you.) It also contains a lengthy list of abbreviations in Table 1 which are helpful in unlocking the secrets in the following sections.

Pay special attention to 1.02, which deals with who's responsible when a yacht participates in a race. While it doesn't specify the owner or captain, it does use the term "person in charge" which is generally the owner or charterer. The "person in charge" is ultimately responsible for the condition of the yacht, the preparedness of the crew, and the fact that all of the gear called for in the Special Regs is on the boat and ready to be put to use. There have been some instances (they are relatively rare, thankfully) where yachts have been found to be deficient in some regard. The deficiency could be a the accuracy of a rating certificate, or whether or not the crew moved ballast during a race, or whether or not a particular piece of safety gear was carried aboard. It's embarrassing to note that on some occasions, the "person in charge" abdicates his or her responsibility by blaming someone else for that deficiency. Common scapegoats include the crew, the boatyard manager, the pre-race inspector, the measurer, someone at US Sailing, the race committee, etc.

Participating in a sailboat race is one of the relatively few remaining situations in life where you take full responsibility for something; in this case the preparation of a sailboat to go to sea, to race according to the rules, and to operate the boat in a seaman-like manner. It's not to be taken lightly, which is one of the reasons that racing a sailboat offshore has such a dedicated group of participants.

Section 2 defines the various Categories from Category 0 (circumnavigations in completely inhospitable areas) to Category 6 (inland, daytime races). Since Category 1 races are "adjacent" to the most strict, most regulated races, it should serve as a gentle warning to the prospective participant that s/he is about to embark on a challenging endeavor. Category 1 races, using the US Sailing prescription definition are "of long distance, well offshore, in large unprotected bays, and in waters where large waves, strong currents, or conditions leading to the rapid onset of hypothermia are possible, where yachts must be completely self-sufficient for extended periods of time, capable of withstanding heavy storms and prepared to meet serious emergencies without the expectation of outside assistance."

Of course, this is intended to put the fear of God in you so that you don't enter a Category 1 race with the presumption that you can buffalo your way through the inspection, preparation, or selection of crew that is required.

One frequently quoted fact is that when you are half way from the West Coast of California to Hawaii, you are as far from land as any place on the Earth's surface. 1100 nautical miles to Hawaii, and 1100 miles to either Southern or Northern California (oh, and 12,000 feet to the bottom of the Pacific.) You are in the oceanic equivalent of the Sahara Desert, or the Northwest Territories, or the Southern Ocean. It's entirely up to you as to whether you'll be able to complete the second 1100 miles, based on your boat selection, boat preparation, crew selection, and ability to jury rig that which breaks along the way. There are no awards for fixing an inadequately prepared boat and limping into Honolulu or Kaneohe Bay or Hilo. It's expected that you'll have a successful voyage without outside assistance, and without theatrics. 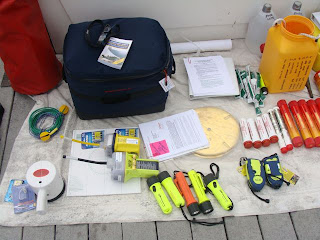 Pay special attention to 2.02. It says that a yacht must be be prepared to be inspected at any time. In general, yachts are inspected prior to the race as part of the preparation process and they may be inspected at the finish line to insure compliance. Some race organizers inspect random boats as they finish (like every fifth boat) while others inspect boats that are likely to do well, while others inspect 100% of the finishers. What gets inspected also varies. In some instances, the race committee will inspect a predetermined list of 5-10 items which (possibly) have a likelihood of non-compliance. In other cases, they will look for items noted on the pre-departure inspection as being deficient. The point is that you should never embark on a race hoping that no one will notice that you're missing required items and, more importantly, that you should never blame the race committee, your shoreside inspector, or the finish line inspector for discovering that you drank your emergency water or forgot your trysail. Buck up! Take responsibility for the seaworthiness of your vessel, or don't compete.

Those who value fairness and seamanship also value Section 2.03. The Special Regs are not there to cause you to buy a bunch of equipment you'll never use, nor are they intended to make your boat uncompetitive. They exist to allow you to leverage the accumulated wisdom of tens of thousands of sailors in hundreds of races. Section 2.03 says that if you're going to put all this gear on your boat, make sure it's going to work as intended. The gear has to be accessible, sized correctly, and in working order. That means that if it says to have "an anchor with suitable combination of chain and rope", that you shouldn't show up with an undersized aluminum anchor with a cut-down anchor stock (which happens to fit between your stringers), 10' of 1/4" of chain and 150' of rode. Plus, that anchor and rode has to be stored securely so that if the boat inverts, the anchor and rode will not become a source of headaches to the crew.